What Does It REALLY Mean When Someone Tells You to Work Hard?

“You need to work hard. You have to be the hardest worker in the room.”

What does this even mean? This is the most annoying advice in the world.

I’ve paid to attend wrestling seminars and other events where the speaker rants about working hard for an hour. I mean, I drove here and paid for this. Do I really need to be lectured on working hard right now?

I was hoping for some practical advice, Mr. big time speaker. What does it mean to be the hardest worker in the room?

Am I never supposed to rest? Should I just stop sleeping? Am I slacker if I stop to eat?

I used to be all about the “working hard.” I would chug energy drinks and run on no sleep. I had a belly and always looked tired. I thought that I always had to be on. This kind of attitude got me nowhere. Some of the most successful people I know don’t work that hard. They work smart and they’re very strategic in how they spend their time and the people they spend their time with.

I have friends who are convinced that they have to work hard 24/7. They actually miss out on legit opportunities to make new connections and do something cool because they feel that they need to be at home working hard.

Breaking news: Successful people in your field are out. There’s more to “getting ahead” than just trying to be a productive zombie 24/7.

I’ve done my best to figure out what it means when someone tells you to work hard because our goal here is to always leave you with practical advice.

What does it actually mean when someone tells you to work hard?

Be willing to fail.

“Failure should be our teacher, not our undertaker. Failure is delay, not defeat. It is a temporary detour, not a dead end. Failure is something we can avoid only by saying nothing, doing nothing, and being nothing.” — Denis Waitley

Most of us are too afraid of failure.

Are you willing to fail? Are you okay with putting yourself out there? Could you handle being known as a failure? Will; you give up after one failure?

It’s easy to talk about what you’re going to do. It’s difficult to actually do it. It’s even more challenging to bounce back from a failure. Get into the habit of failing. This will mean that you’re taking on bold risks.

Know the rules of the game.

“You have to learn the rules of the game. And then you have to play better than anyone else.” — Albert Einstein

What are the rules of the game? What separates the winners from the losers? How do you get ahead? What’s the formula for success in this chosen field?

You have to figure this out. You can’t enter a game without knowing the rules and then complain when you lose.

Like Booker T used to say, “don’t hate the player, hate the game.”

Study the players in the game and learn from the best.

“A mentor is someone who sees more talent and ability within you, than you see in yourself, and helps bring it out of you.” — Bob Proctor

Who are the top players? Who’s ahead of you? Who has failed at this? Who can you be better than?

You need to know all of this.

You have to study the best and learn from the best. It’s important to have a mentor and to see what has worked for others in the past.

I learn from the very best. My BJJ coach is one of the best fighters in the UFC. I ask many questions and do my best to see what it takes to be successful.

Hard work is pointless if you’re surrounded by losers and you’re not learning from the best.

Avoid the distractions and try to focus.

“We lose ourselves in the things we love, we find ourselves there too.” — Kristin Martz

It’s easy to get distracted. You can start watching the newest Netflix series or you can start ranting about the government all day instead of doing something. One visit to Facebook and you’re day is spent watching random documentaries.

I see friends go from posting about the hustle to going off about some sporting event. It’s difficult to finish an article while worrying about the score (I’ve tried it).

It’s actually really difficult to remain focused and consistent. I see folks lose focus on a daily basis. I’m involved in a BJJ class, blogging, and pro wrestling. In each of these three fields, people quit constantly.

Hard work is useless if you’re working on the wrong things and constantly getting distracted by every little thing that comes in front of you.

“Don’t be afraid to give up the good to go for the great.” — John D. Rockefeller

You should probably go all in or at least dedicate yourself to this specific project.

This is where I fail miserably. I always have at least three projects on the go. I’ve never gone all in on just one aspect of my life.

When someone suggests that you work hard, they’re usually strongly hinting at going all in. Don’t dabble and play around. Try to go all in and put something on the line.

This is pretty much mandatory in every industry. You want to be the first one there and the last to leave. They should have to forcefully kick you out. This applies to training, events, practice, and anything that will help you in the chosen field.

People always notice this kind of stuff too. Everyone sees you when you walk in late. You also stick out when you leave early.

That’s what it REALLY means when you get told that you should be working hard. I hope that this clears everything up for you and that you’re not fumbling around in the dark.

Stop asking about what you need to do to become successful.

“Your actions speak so loudly, I can not hear what you are saying.” — Ralph Waldo Emerson

When someone tells you to work hard they’re pretty much telling you to ask better questions. Nobody knows how to answer your generic question because it’s usually too vague. Improve the quality of your questions and you’ll get better answers.

That’s all they’re going to tell you. I don’t want you to be stuck with this useless advice. Being told to work hard is like being told to be nice or to try your best.

It’s very important that you launch and test yourself out. It’s fun to ask for advice and to read articles about hustling, but the real work comes when you launch. I’ve launched projects on the fly, entered a half-marathon with little training, and have traveled alone on big trips.

Get into the habit of launching and learning-on-the-job. You won’t have time to think about if you’re working hard enough or not.

“Success is not measured by what you accomplish, but by the opposition you have encountered, and the courage with which you have maintained the struggle against overwhelming odds.” — Orison Swett Marden 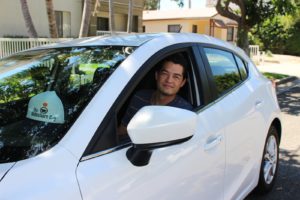